Bitcoin closed the month of October at $61,343, which is its highest monthly close ever recorded. As Bitcoin Archive notes on Twitter, all-time high monthly closes are quite often a sign of more strength to come.

Bitcoin’s closing price was roughly 3% away from analyst PlanB’s floor price prediction of $63,000, though that level was already hit earlier in the month. PlanB is now shooting for $98,000 in November, or about a 58% gain over the next 30 days.

Some analysts are looking to previous bull markets to forecast what’s next for BTC. TechDev, for example, has his eye on the monthly relative strength index (RSI), which is currently grinding its way up past the 70 mark. He points out that in the previous bull cycles, the monthly RSI has made two separate waves to the upper end of the scale before price tops out. If Bitcoin is indeed about to form another blow-off top in the coming months, the RSI pattern would perhaps look like a more spread out version of 2013’s cycle.

“We are now headed toward our second monthly RSI peak like every cycle before.

Nowhere near a top. 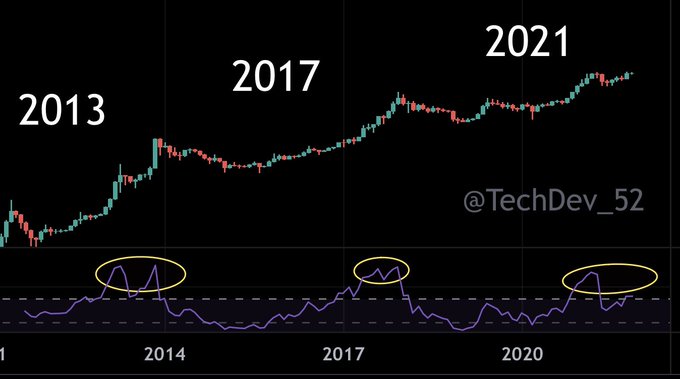 On-chain analysts are also generally in agreeance of a healthy market structure. Glassnode analyst TXMC says Bitcoin pretty much looks like a “coiled spring.” In a thread, the analyst says that the realized HODL (RHODL) ratio, which compares old coins to young coins, is “screaming” that BTC is midway through a bull market which began in 2019. Peaks in RHODL have correlated with blow-off market cycle tops, according to Glassnode’s data.

“It’s aligned with the 2013 double pump bull run, matching where price usually breaks the ATH, and has called each previous macro top in history.”

While on-chain activity is relatively quiet, even at all time highs, the Glassnode analyst says it’s nothing to worry about for bulls as retail traders don’t “need to be here for price discovery” until the next big narrative comes along.

The on-chain analyst also points out one thing about the current Bitcoin bull market that makes it unique to others. TXMC says that the liquid supply of BTC, or the number of coins owned by people with a history of selling, has been steadily going down relative to illiquid supply ever since March of 2020. This appears to be an unprecedented phenomenon, and could suggest increasing pressure on supply.

“Liquid Supply, the BTC owned by entities with a history of selling, has been in decline since March 2020 after a decade of growth.

HODLers are taking more and more supply away from this class of investors.

All eyes will be on the flagship crypto in November to see if it can live up to it’s bullish monthly breakout.